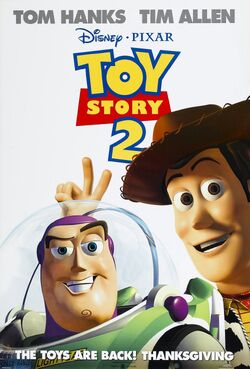 Woody Hangs out with Roundup Gang

Woody tries to Get His Arm Back

When Somebody Love Me

Buzz And The gang Searching For Woody

Buzz And The Gang Vs Zurg

Buzz And The Gang Rescue Woody from Airport

Retrieved from "https://transcripts.fandom.com/wiki/Toy_Story_2?oldid=111524"
Community content is available under CC-BY-SA unless otherwise noted.