This article is a stub. You can help Transcripts Wiki by expanding it. 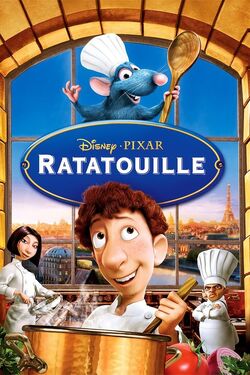 A TELEVISION SET -tuned to a DOCUMENTARY. As an old fashioned World GLOBE rotates in a sea of clouds, the EIFFEL TOWER slowly comes into view over the horizon, dwarfing FRANCE underneath it.

We see images of GUSTEAU: cooking, signing his cookbook, in front of his famous restaurant. Gusteau is in his early forties, but his massive girth makes him look older.

T.V. NARRATOR (CONT’D): Gusteau’s restaurant is the toast of Paris, booked five months in advance, and his dazzling ascent to the top of Fine French Cuisine has made his competitors envious. He is the youngest Chef ever to achieve a five star rating. Chef Gusteau’s cookbook “Anyone Can Cook!” has climbed to the top of the bestseller list. But not everyone celebrates its success.

A tall, gaunt, severe-looking MAN with fish-belly white skin appears on the TV screen. SUPER: ANTON EGO-FOOD CRITIC. Beneath that, in italics, is his moniker: The Grim Eater.

EGO: Amusing title, “Anyone Can Cook”. What’s even more amusing is that Gusteau actually seems to believe it. I, on the other hand, take cooking seriously and no-- I don’t think “anyone” can do it...

TITLES (OVER BLACK):
The SOUND of wind rattling barren branches...
WALT DISNEY PICTURES PRESENTS
A PIXAR ANIMATION STUDIOS FILM
...and we FADE IN to reveal:

FRENCH COUNTRYSIDE - LATE AFTERNOON
A light rain falls on a SMALL FARMHOUSE. The last remaining dead leaves tremble in the gusts. The quiet is shattered by a LOUD GUNSHOT that lights up the inside of the cottage. CAMERA pushes down and in toward a single window.

RATATOUILLE
As we move closer, we begin to hear muffled SOUNDS OF STRUGGLE; furniture being bumped, dishes breaking, an indescribable CRASH, followed by an OLD LADY’S SHRIEK. We’re close to the WINDOW now, when it is suddenly SHATTERED by a COOKBOOK. Instantly the action FREEZES. Underneath its splayed pages, shielding himself from the shards of splintering glass is, inexplicably, a RAT, named REMY. He’s scrawny, frightened, almost comic. It’s hard not
to feel sympathetic towards the little guy.

REMY (V.O.): This is me. I think it’s apparent I need to rethink my life a little bit. What’s my problem? First of all-

OUTSIDE THE FARMHOUSE - DUSK - WEEKS EARLIER
A SILHOUETTE darts out from behind a wooden barrel, pausing upright against a blood red sky. Mangy, sinister, the opposite of Remy. This is how most humans see RATS.

Assured the coast is clear, the SINISTER RAT scampers out into the yard, followed by DOZENS MORE RATS. The RATS move across the expanse of grass toward a COMPOST HEAP, which sits in the middle of a field under the darkening sky. Resourceful and well coordinated, the rats grab bits of decomposing food and carry it off. REMY is among them, drearily going through garbage.

REMY (V.O.): And secondly-- I have a highly developed sense of taste and smell.
Suddenly he catches a SCENT; which leads him to uncover a nearly untouched piece of PASTRY, a discarded NAPOLEON.

The Napoleon suddenly erupts, and out pops Remy’s pudgy brother EMILE, covered in cream and completely oblivious to the destruction he’s wrought.

EMILE: You can smell all that? Wow. You have a gift.

REMY (V.O.): This is Emile. My brother. He’s easily impressed.

DJANGO: So you can smell ingredients. So what?

REMY (V.O.): This is my Dad. He’s never impressed. He also happens to be the leader of our clan.

Remy catches another scent and FROWNS; this new scent is different somehow, wrong. He follows the scent to Django

REMY (V.O.): So what’s wrong with having highly developed senses?

Django is about to eat the APPLE CORE when Remy lunges at him, snatching the core from his hands.

SHED - MINUTES LATER
Still holding the APPLE CORE, Remy sniffs the air, following a scent to a tarp in the corner. He lifts it, REVEALING: a can of RAT POISON. The other rats REACT. Django’s impressed.

REMY: (V.O.)
Turns out that funny smell was rat poison. Suddenly Dad didn’t think my talent was useless. I was feeling pretty good about my gift. Until Dad gave me a job…

- FARMHOUSE - COMPOST PILE - DAY
A line of rats file past REMY, holding up rotted scraps of food so that each one passes under his nose.

As Remy sniffs with all the gusto of a lifelong DMV employee, the line shuffles forward with each “clean”.

REMY: (sniffs before each one) Clean... clean... clean-erino... cleaneriffic... close to Godliness--

The rat under inspection stands there, unsure as to whether or not he’s been approved.

EMILE hey, little brother!
REMY
Emile!
Django joins Emile as he grabs the cage latch from the
outside. Straining with all their might, the three rats pop
it open. Remy jumps out, gives Django and Emile quick hugs--
REMY
I love you guys.
-then scrambles out the trunk and takes off toward GUSTEAU’S.
DJANGO
Where you going??
REMY
(calling back)
Back to the restaurant! They’ll
fail without me!
DJANGO
WHY DO YOU CARE??
REMY
BECAUSE I’M A COOK!!

LINGUINI
Can I interest you in a dessert this evening?

Ego grins, turns toward the window in the kitchen door where Remy is watching, and calls out--

Remy signals Ego in the affirmative and goes off to create something delicious. CAMERA pulls away from this happy scene to reveal --a BISTRO jammed with open-minded foodies; a hip, cultured mixture of bohemians of all ages... all there to enjoy good food and life. CAMERA CONTINUES out the window and we are-- OUTSIDE THE BISTRO - PARIS - DUSK. A long line of customers has formed outside, waiting to get in. An elegant METAL SIGN comes into view, featuring a rat wearing a CHEF’S TOQUE, along with the bistro’s name--
La Ratatouille.
FINE’(THE END).


Retrieved from "https://transcripts.fandom.com/wiki/Ratatouille?oldid=105585"
Community content is available under CC-BY-SA unless otherwise noted.