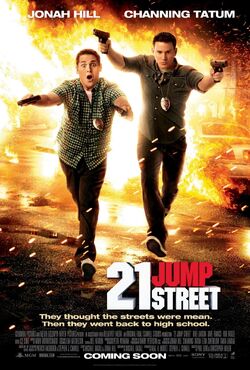 [Schmidt looks at Gordon confused] My point is, you have to. Everyone auditions for Peter. [in the Chemistry class]

Schmidt: I am! [Jenko laughs as he hears Schmidt choke]

Schmidt: Look, I’m sorry I called you Rainman. I know I didn’t say you were, but you’re smart. You’re a smart guy, and you’re thoughtful, and you’re sincere, and…and you’re sweet and you’re loyal. And I fucking cherish you. [there’s a pause as Jenko just looks at him] Shall we high five? [Jenko nods and they jump to do a high five] Ow! My hand! [seeing that Jenko is in pain from his bullet wound] Are you alright? Do you need to go to the hospital, man?

Retrieved from "https://transcripts.fandom.com/wiki/21_Jump_Street?oldid=111118"
Community content is available under CC-BY-SA unless otherwise noted.